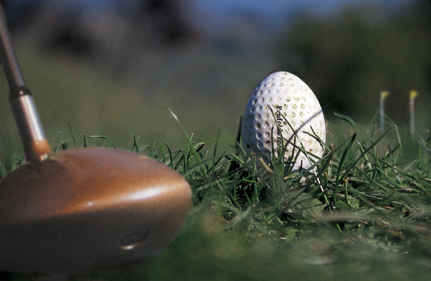 Apart from the obvious differences like having a whole lot more ball control, and a target that requires you to have a good relationship with your wedge, golfers say that GolfCross® is exciting to play because it encourages them to take risks. With golf you don’t go for the hole from 50 yards out and expect to get it in. It’s just too small for that. You chip on and expect to get close so that you can hole out with your next shot. But with GolfCross®, because the target is so much bigger, there’s a greater chance that you can goal out from that distance. There’s also a reasonable chance that if you miss the goal from further away, you’ll get yourself into trouble. That’s because your ball will be flying through the air when it passes the goal, not rolling sedately along the green.

It’s not that you can’t play safely in Cross — you can. You can chip onto the yard and then go for goal with your next shot from closer in and with less risk. But when it comes to goaling out, the chances in GolfCross® are there and the rewards are high, so you’re tempted to take them. In golf, there isn’t really a risky putt that’s going to end up off the green if it doesn’t go in. You automatically play the safe, measured shot. That’s what putting is all about. Apart from perhaps using the slope of the green, there isn’t a risk you can take when you’re holing out that will see you either going in or being further away from where you started. But in Cross, your shot for goal could be disastrous or a payoff. And, where there’s a certain inevitability to the final tap into the golf hole, with Cross there are no gimmies. It’s this risky nature of GolfCross® that attracts golfers who want a new challenge.

Can I use my golf clubs for GolfCross?

Yes exactly the same clubs are used but you won’t need a putter. Most players replace it with a pitching wedge because of all the lofted shots that are the stuff of this new game. The only other piece of equipment you’ll need apart from the oval GolfCross® ball is a tee cup which holds the ball at the different angles required to make it fly straight or curved.

Will playing GolfCross effect my golf?

Without question, yes. But it will be a positive change. Because you’ll need to master the lofted shot into the goal it will by necessity improve your golfing short game. There is also the positive effect that the oval ball will have on your swing. Knowing that you can always hit it straight if you set it in the right position is a mindset that you’ll take back to golf. You’ll generally swing with more confidence. You should remember though that GolfCross® is not remote control hitting. The ball might be smart but you still need to be able to hit it cleanly. You need touch, accuracy, correct club selection and all the other things that make golf such a wonderfully challenging sport.

Are the yards in GolfCross like the greens in golf?

Yes, in as much as they are both preliminary target areas of different shapes and sizes. But because there’s no putting in Cross, the yards aren’t mown any differently from the fairways and their shape is defined by ground level perimeter pegs. Being in the yard in GolfCross® is more important than being on the green in golf because there’s only one easy way into the goal and unless you’re in the yard you can’t turn the goal to face you.

Can GolfCross be set up on an existing golf course?

Yes. Goals and yards can be set up to the side of greens and far enough away so there’s little chance of balls landing on them. If they do, a free drop is taken from the edge of the green to ensure they’re not damaged.

Another method of setting up GolfCross® on a golf course is to play the goals in the reverse direction from the holes. Teeing areas are provided near greens, and yards are situated near the golf tees. Playing a course backwards like this adds great interest and the oval ball’s ability to handle tight corners allows dog-leg fairways to be played in reverse.

Does GolfCross have to be set up on a farm?

GolfCross® courses don’t need to be set up on farms. Almost any land is suitable. The value of farms is that they come with farmers, and farmers have years of accumulated knowledge and understanding of the land that is their livelihood. They know just where it’s safe to site a riverside tee because they know just how high the water rises in a flood. They can tell you where the wind is worst and the soil is best, where it dries out in the summer and where it stays green. Above all they know about grass — how to grow it and how to look after it, and they have all the necessary equipment. In short, working in partnership with a farmer will make the process a whole lot easier and a good deal cheaper too.

Does the oval ball fly as far as the round golf ball?

The oval GolfCross ball is able to travel a shorter distance than the round ball because it presents a larger profile to the air. The shorter the club the less the distance differential — usually around ten yards for a short iron and up to forty for a driver. The fact that it doesn’t travel as far as a round golf ball is a boon to course designers as it enables fairways to be shorter which in turn means greater flexibility in the utilization of available land.

Why does the oval golf ball hum as it travels through the air?

The oval ball makes a high pitched hum when it is spinning rapidly forwards or backwards (tumbling) around its short axis. The higher the pitch of hum the greater its rate of spin. It makes this noise because the airflow over it is irregular. As the ball tumbles it creates a vibrating wave of disturbed air behind it which creates sound.

The sound the oval ball makes allows you to predict what it will do in the air and what course it will take when it comes in contact with the ground. For example, a backspinning ball with a high pitched hum will have a high trajectory, a steep angle of descent and stop quickly on pitching

What are the most important variables in the design of the oval golf ball?

Weight and shape. Weight determines the ball’s ability to sustain spin, and shape impacts on how easily it can spin. The oval ball relies on a long spin time to maintain its various curving flight paths and it needs to be dense enough to achieve them but without feeling heavy off the club. Its overall shape — how thin or fat it is and whether the ends are rounded or pointed — determines how easily it slips through the air and therefore how quickly it spi